A jubilee is an occasion to be celebrated to recall the marvelous ways in which the school has fulfilled its mission in imparting education, moral and spiritual values, and discipline to help build able citizens whom our society needs today. They also provide an opportunity to reflect on the past achievements of school as well as introspect on the preparations to meet challenges that lie ahead.

A jubilee is an occasion to be celebrated to recall the marvelous ways in which the school has fulfilled its mission in imparting education, moral and spiritual values, and discipline to help build able citizens whom our society needs today. They also provide an opportunity to reflect on the past achievements of school as well as introspect on the preparations to meet challenges that lie ahead.

2017-18 was a rejoicing year in the history of Carmel with the motto – “ Honoring our Past, Creating our Future”.

Many events were planned throughout the year as a prelude before the main event.

Highlights of Golden Jubilee celebrations by the Carmel Family-

Golden jubilee was flagged off with a workshop for Carmel mentors by Mr. Simerjeeth Singh, the keynote speaker who motivated everyone to work pushing beyond set limitations and getting into roots of professional DNA.

The investiture ceremony for the student council was celebrated in the esteem presence of Mr. Arjun Devaiah, International Athlete. It was a chin-up event for the student council members and students whom our administrator rightly addressed as – “The Golden Babies” The Investiture ceremony culminated with the environment day celebration in which a tableau on nature and planting saplings was presented, re-enforcing in young minds the importance of conserving natural resources.

The Grand feast of our Lady of Mt Carmel was celebrated in the gracious presence of Rev. Dr. Bernard Moras, Archbishop of Bangalore, Rev.Fr. Eric Rodrigues, President of Carmel Education Society. Archbishop highlighted the significance of celebrating the 50th year and emphasized inculcating values, moral ethics, peace, and harmony. This joyous occasion was made more memorable by staff outing to –‘Our Native village- Eco resorts’, Hessaraghatta. The day was a packet of energy with fun-filled events.

Delighted Foodfest was organized by the class 10 students as a part of SUPW with the Art and Craft Department. Students participated to cater healthy, culturally rich platters from different parts of India. It was an amalgamation of our culture, food, and the interest of students to make a difference in society. The amount collected in the food fest was given as charity, the joy of giving. 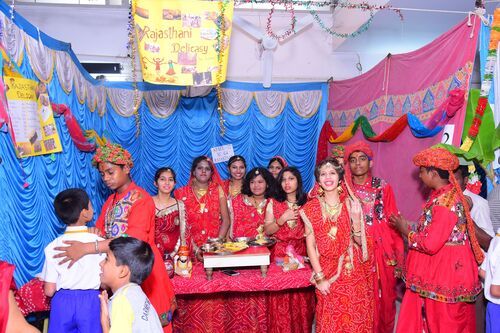 The 50th Annual Athletic meet was a two-day event held at Ambedkar Ground. The Chief of the Guests were Sri Abdul Wajid Kazi, Deputy Director of Public Instructions, Bangalore North, and Syed Kirmani, International cricketer, Arjuna Awardee. Students participated with zeal to achieve and with all the sportsmanship to keep their house flags high. Winners were awarded, championship trophies were given to the winning teams. The sports day ended with memories and promises for all the young sports enthusiasts. 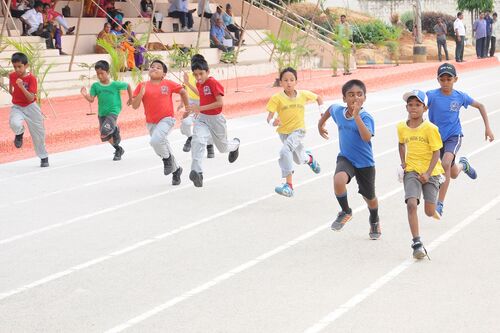 Independence day was celebrated to remember the freedom fighters and pass on the patriotism of nation builders to budding Carmelites. Chief Guest Mr. Sridhar Kempegowda, a Social worker addressed the gathering and motivated everyone to contribute to the nation in one way or the other. 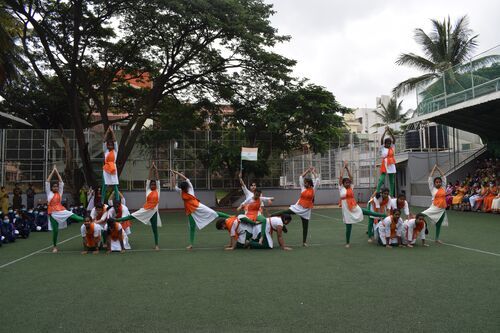 Different Strokes- Talent fest was a fantastic event with 50 colossal events to commemorate the Golden jubilee year of school. It was an inter-school fest that provided a platform for students to showcase their talent in cultural, literary, and art events. The Chief Guests for the event were Mr . Srinagar Kitty, Kannada Actor, Murali Gurappa, Director. The event ended with a mesmerizing performance by LAGORI Band. 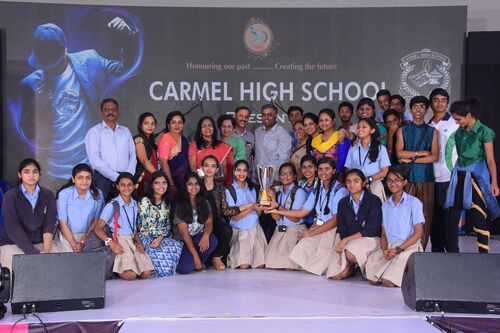 Teachers Day celebration was planned and executed by the management in a very unique way by honoring the teachers and staff members who had been a part of the journey in the last 5 decades. Prof. M.D Nanjunda, Founder secretary of Coorg Public School, and Mrs. Malini Krishna Moorthy, Additional commissioner of police were the chief guests. The Director of Academics was felicitated by the staff for achieving the “Women Achiever Award conferred by Score more Foundation. 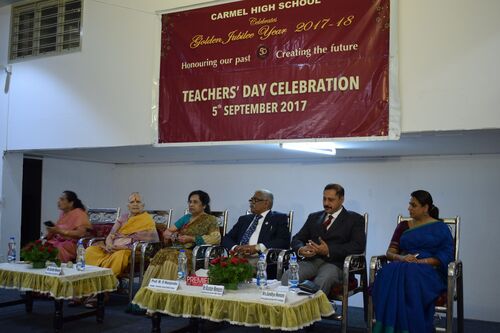 The 17th edition of the Alexander memorial volleyball tournament was organized on the November 3rd and 4th with the participation of over 36 schools across the state and was conducted under floodlights with some close scoring matches and crowds cheering loudly. The first edition of Alexander’s memorial throw ball tournament for girls was also introduced as part of the golden jubilee celebration. Mr. Parameshwar, a national volleyball player was the chief guest who electrified the final match which was held in floodlights. 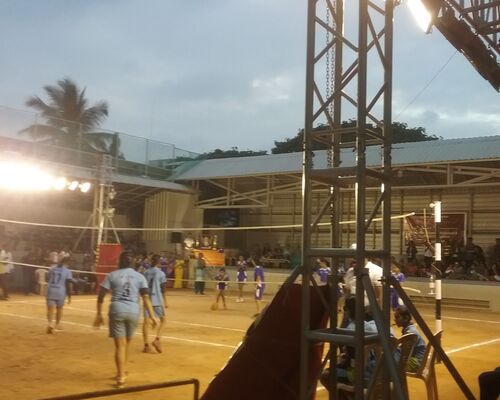 Carmeval – Fun and Fronic event was hosted for the first time by Carmel for celebrating the children’s day in grandeur. The event was a funfair with games, dance, Zumba, lucky dip, and food. It was a treat for eyes and mind to be a part of Carmel carnival with bright colors, lively Carmel families enjoying every part of it with their kids. 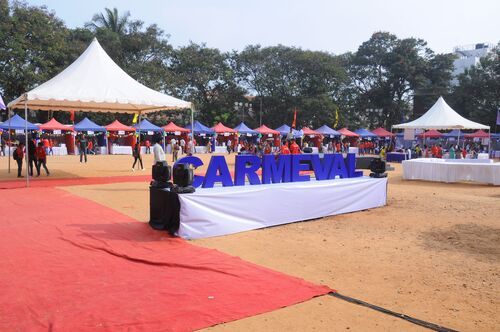 The first grand reunion of Alumni meet was held on December 10th. The Alumni shared their experiences as well as interesting moments of campus life which included funny anecdotes, bringing cheer and laughter. 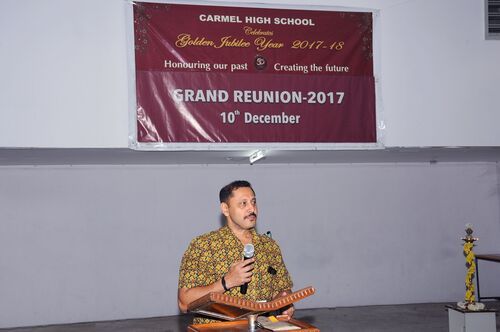 Christmas was celebrated with great joy and enthusiasm. The celebration was filled with melodious singing of carols, vibrant decoration of the auditorium, a tableau of the birth of Christ, a message by the management, and games to light up the evening.

The most awaited day, the 50th Golden Jubilee celebration was on Jan 10th, 2018 was celebrated on a grand scale at Palace grounds. The students, teachers, and support staff toiled for months, practiced stage events under the guidance of professional choreographers to put up a spectacular show on the Golden jubilee day. The chief guests for the grandeur were the Governor of Karnataka, Vajubhai Rudhabhai Vala, Minister of State for sports and youth affairs, Mr. Pramod Madhwaraj, Vicar General of the Archdiocese of Bengaluru -Rev. Monsignor Fr. S Jayanathan, along with Founder Principal and Director of Academics Mrs. Dorothy Menezes, Vice President of Carmel Education Society Mrs. Sandhya Menezes, Secretary Mr. Roshan Menezes, and Principal Dr. Mrs. Florence D'Souza.

The event was inaugurated by lighting the lamp, invocation by the school choir. The bust of Late Alexander Menezes was unveiled followed by the release of the Golden Jubilee souvenir. The cultural events paid tribute to the 50 years of the Carmel Journey. All the students, teachers, and support staff were part of the event. It was the biggest celebration of the era. The school building was illuminated with lights that added to the festivity of celebration.

When we honor the past, the future becomes energized and the present becomes a celebration.

Golden Jubilee could well be called the year of gratitude because we have so much to be thankful for.